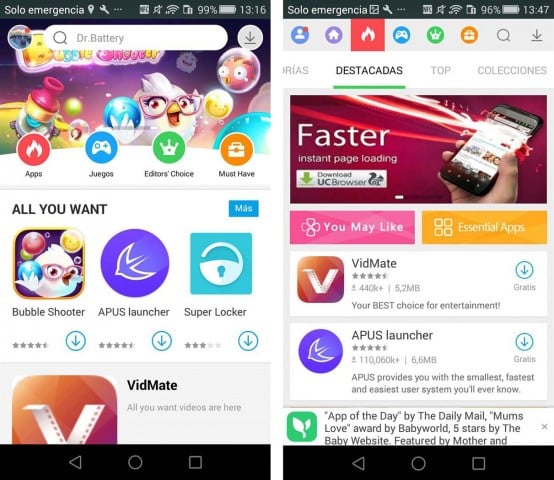 If you are not satisfied with Google Play Store and want another application that can also work as a file manager for your phone, then Mobogenie application is the best option. Mobogenie is a third-party app store available for both mobile and PC, which allows you to download all the apps you want, even if they aren’t from the main stores.

It also lets you communicate with your computer or phone device, so you can reorganize your files more intuitively and easily transfer files from one device to another.

There are various outstanding features of Mobogenie app that makes it the number one choice of millions of users. Some core features are,

Due to its straightforward interface, the program is rather simple to use. The layout is quite thorough with different sections to navigate easily. The marketplace is set as the default, and function navigation is done through tabs on the upper part of the screen.

Mobogenie works as a toolkit for Android smart-phones, allowing you to modify and upgrade the phone as necessary. Upon connecting your phone into the computer, it instantly searches for the drivers and looks for system updates that may have not been applied. The file management feature is on par with other management apps that allow users to transfer and trade between their PC and phone.

In Mobogenie application, you will get content beyond apps. It gives you access to almost anything, such as - e-books, videos, music, YouTube content, and even ringtones and wallpapers. So, it can be said that Mobogenie is a versatile tool that improves your mobile device’s utility.

The Mobogenie app comes with a debugger for your phone. It cleans up the memory of your mobile device using memory booster and increases your phone’s speed. You can also add commands to easily reach specific areas in your device for navigating more easily.

The application provides control over what is using your battery so that you can save battery usage, all while optimizing your phone for maximum speed.

Mobogenie app is available in over twenty languages, including - English, Chinese, Hindi, Portuguese, Russian, and many others.

It does not cost anything to use Mobogenie Android app. You can access all the contents for free here, even if normally you would have to pay for it.

Mobogenie contains a back-up feature that allows you to back-up the entire file structure of your phone and copies those files to the computer for safe keeping. You can also restore your files to the phone easily and quickly.